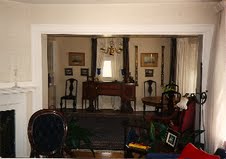 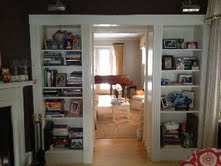 A friend of mine bought an older home here in Concord. This is a project they took on in their Living Room:
“Originally there were pocket doors in the opening. By closing the pocket doors you could separate the rooms but with them open the space seemed larger. At some point the doors were taken out and the walls just closed up. The wall they had been housed in was quite thick (perhaps 12 inches instead of the standard 5). That gave us the idea to extend the wall and use the depth to make bookcases so we did and then we added pocket French doors so we can close off that room.”