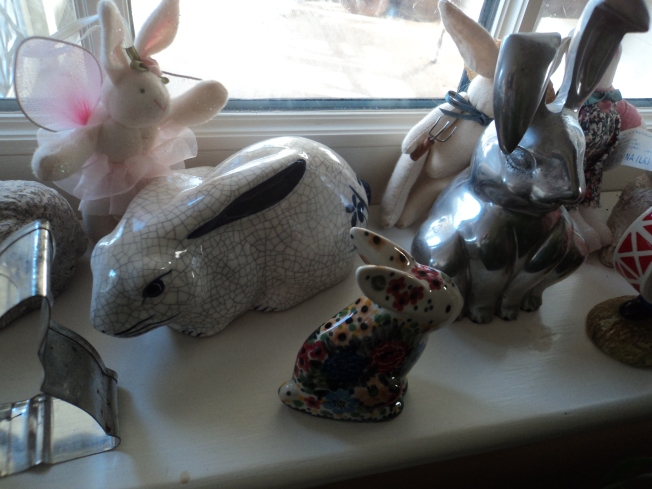 These beautiful bunnies are actually made here in Concord.They are reproductions of Dedham Pottery-here is the history:

In 1876, family member Hugh C. Robertson visited the Centennial Exposition in Philadelphia – an early world’s fair – and viewed pottery from China with a blood-red crackled glaze that would inspire him to create his own version. In 1867, the Robertson family founded their first company in Chelsea, Massachusetts on the corner of Marginal and Willow Streets, a prelude to Dedham Pottery, called Chelsea Pottery U.S.. The Boston Daily Globe reported on Monday, July, 30th 1894, that “about 10 acres of land at East Dedham, was sold for $6,500 to the Chelsea Pottery Company” and the pottery company would be moving from Chelsea to Dedham, “just as soon as proper buildings can be erected and other necessary work done.” Chelsea Pottery U.S. closed in 1895 and, just as promised, the company moved on to Dedham, MA where Hugh C. Robertson, a fifth-generation Scottish potter, opened Dedham Pottery in 1896.