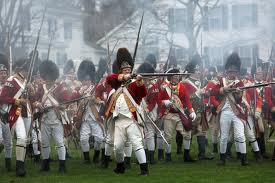 The year is 1775. Unrest has been growing in the colonies. The Boston Massacre that took place just five years earlier is fresh in the memories of many. The protests regarding taxation reached a new height in the form of the Boston Tea Party. Colonists are clamoring for the right to run their own affairs, some going as far as to call for independence from the mother country. The stage is set for an historic conflict.
The Crown decides to put a stop to this. Early in the morning of April 19, 1775, a long column of Regulars starts its march to Concord. Their orders are to destroy muskets, powder, cannon, and other provisions being stockpiled by the rebels on Colonel James Barrett’s farm.
The column approaches Lexington as dawn rises to find the militia formed up on the town green. Their goal is not to engage the troops, but to show defiance to the Crown. The British officers are indignant at their risky move and order them to lay down their arms and disperse. Most men disperse. Some do not hear the order and stand fast. None lay down their arms. Suddenly a shot rings out, discipline breaks down, and more shots are fired. When the smoke clears, two militiamen are found shot dead, several more are wounded. The column marches on to Concord.
A few hours later, the Regulars enter Concord. A detachment is sent to secure the North Bridge. The militia had already formed up on the far side of the Bridge, consisting of men not just from Concord, but many nearby towns who had come to defend their homes and lives. Smoke rises from the center of Concord. The militia believes the Regulars are out to burn down the town. The order comes to load their muskets. The men advance towards the Bridge in fine order to the astonishment of the Regulars. The rebels were advancing on the British army! Retreating off the Bridge, the Regulars form into firing positions. As in Lexington, a shot rings out. The Regulars fire. Militiamen fall but they continue their advance. Then the order is given to the militia: “Fire, fellow soldiers, for God’s sake fire!”. The American Revolution has begun.

And notice-they say the American Revolution began AFTER Concord!