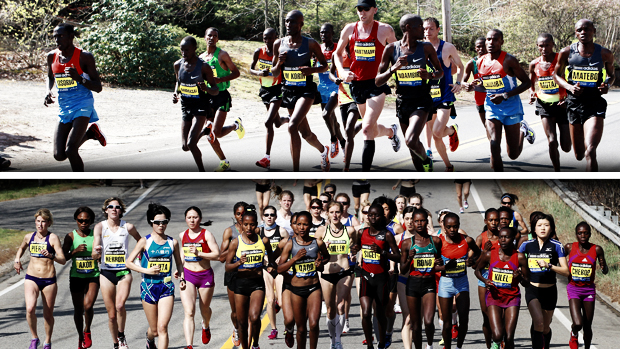 In Massachusetts and in Maine Patriots’ Day is a holiday so all banks,post offices and most businesses are closed.

Happy running to all of the Boston Marathon participants!Here is some history about the event:

The Boston Marathon is an annual marathon hosted by several cities in Greater Boston in eastern Massachusetts. It is always held on Patriots’ Day, the third Monday of April. Begun in 1897, inspired by the success of the first modern-day marathon competition in the 1896 Summer Olympics, the Boston Marathon is the world’s oldest annual marathon, and ranks as one of the world’s best-known road racing events. It is one of six World Marathon Majors.
Since 1897, the Boston Athletic Association (B.A.A.) has managed this event. Amateur and professional runners from all over the world compete in the Boston Marathon each year, braving the hilly New England terrain and varying weather to take part in the race.
The event attracts 500,000 spectators each year, making it New England’s most widely viewed sporting event. Though starting with 18 participants in 1897, the event now attracts an average of about 20,000 registered participants each year, with 26,895 people entering in 2011. The Centennial Boston Marathon in 1996 established a record as the world’s largest marathon with 38,708 entrants, 36,748 starters, and 35,868 finishers.