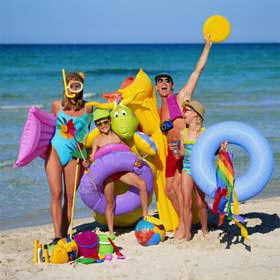 Whatever your image is of summer vacation-the beach, the mountains, the lakes-it is very special to all of us. Most countries only get six weeks or two months of summer vacation because students supposedly forget large amounts of information learned in the past year. Yet some education reformers believe that children are overstimulated in a system which required 48 weeks of schooling. They believe that over-schooling can lead to nervous disorders, depression, and insanity. They believe that children need the 2–3 months off to relax and also to take a break from other childhood stresses associated with school such as peer pressure, cliques, bullying, and the pressure of heavy loads of schoolwork and homework.
Critics of summer vacation point out that American students spend approximately 180 days (26 weeks) per year in school, but Asian students are "in school for 240 to 250 days". This is consistent with the conclusions of researchers who suggest that advanced abilities are in proportion to the time spent learning.

Here are some other countries and their summer vacation schedules that I found interesting:

In Chile, summer vacation lasts from early or mid-December until late February or early March (10, 11 or 12 weeks). In addition, schools have two or three weeks off for Winter in July, and one-week-long break for National Holidays in mid-September.

In England and Wales, summer holidays usually start in the second half of July for state schools, and last until early September – normally a duration of six or seven weeks. In addition, schools have three one-week-long half-term breaks (one at the end of October, one in mid February and one in late May or early June) as well as two weeks off for Christmas and two weeks off for Easter – bringing the total number of weeks off per year to 13. Dates in the independent sector are likely to differ in that schools typically offer an extra week' holiday at the beginning and end of each of the long vacations – i.e. four weeks for Christmas and Easter and eight to ten weeks in summer.

In Germany, summer vacation lasts six weeks. The exact dates vary by state, from the earliest (mid-June to late July) to the latest (late July to early September).

In Japan, the summer vacation generally lasts from late July to early September, and due to the way education in Japan is structured, it takes place within a school year.

In the Netherlands, summer vacation is among the shortest in Europe. It lasts about 6 weeks, usually from mid-July to late August.

In New Zealand, the summer vacation typically starts around mid-December, and ends in late January, which is usually 6 weeks. [2] Senior secondary school students in Year 12 and Year 11 finish in mid-November, and Year 9 and Year 10 finish at the end of November before the first NCEA exams, but summer vacation still does not start until mid-December.

In the Philippines, summer holidays for kindergarten, elementary, and high schools typically start on the third week of March and end in the first to third week of June. This coincides with the country's tropical "summer" (dry season) months from March to May. Colleges and universities, however, offer summer classes for students who wants to take advanced subjects or those who fail to pass the prerequisites for the next school year. School year begins in the second week of June, the start of Philippines' wet season.

In Poland, summer vacation starts in Late June and ends on the first weekday of September. In smaller towns and villages, with big Roman Catholic populations, students usually spend an hour in church and 1–3 hours at school to pick up their report cards on their last day of school.

In Sweden, summer vacation is between the spring and autumn term. Normally it lasts from mid-June to late August (a minimum of 9–10 weeks, differs for each county). In Sweden, students end their term, either at a church or in their school, singing traditional summer songs like "Den blomstertid nu kommer" (normally only the first 2 verses).

In Vietnam, summer holidays usually begins in early June or late May and lasts for two months. It's usually around June to August or late May to late July. Vietnamese students also have a week off for Lunar New Year which is around late January or mid-February. Along with other holidays including Independence Day (Vietnam) on September 2nd, International Labour Day and Reunification Day.