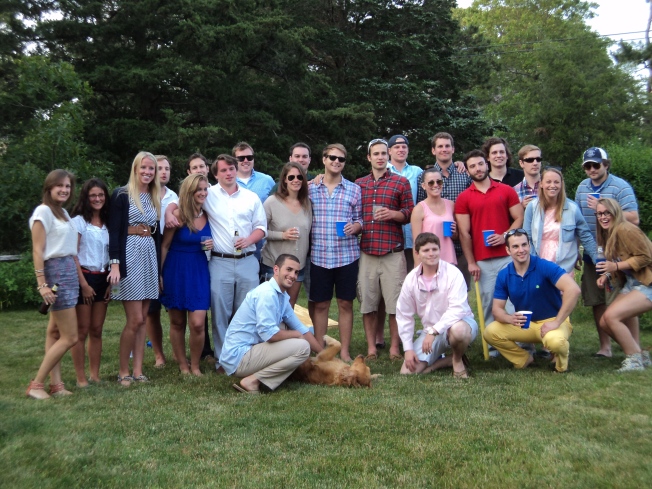 We pulled off a very fun surprise party for our son who turned 25. A lot of his friends came up from NYC and he was definitely surprised. I tried to look up the history of surprise parties and instead came up with this which I think is very helpful so thought I would pass it on. Ours went without a hitch and it IS because no one said anything AND they were all on time!

The great football coach Vince Lombardi once said, “If you’re early, you’re on time. If you’re on time, you’re late… if you’re late, don’t bother showing up.” That saying sums up the number one rule for surprise party etiquette. Rule #1 is just don’t be late! Be early. Be extra early, even. Have a drink, come and eat, and just make sure you are there–bottom line.

The worst thing you can do is try to beat the clock. If you are supposed to be there at 8:00, and you pull up at 7:59, don’t try to enter the party. The proper thing to do in that situation is to text or call someone you know is at the party (and on time), to see if you can still come in. If so, you book it to the front door like Indiana Jones running from the rolling boulder.

If they say you can’t come in because it’s too risky, then get comfortable because you deserve to wait. Don’t be rude and ruin the surprise by trying to rush in at the last minute just so you can yell, “surprise!” with everyone else. If you’re late, you lose that privilege.

I will admit that I am guilty of forgetting when someone’s party is a surprise or not. Sometimes when you talk to people so frequently, like in an office, you forget that their party is a surprise. After all, you and the rest of your coworkers have spent weeks discussing it so it’s easy to forget the guest of honor doesn’t know about it. That said, you must, must, must be careful. The definition of poor etiquette is ruining something someone has worked hard on completing. And there’s no excuse for it.

So how far should you go to keep the secret of a surprise party? Well, put it this way, when I say, “Keep it a secret” I mean go to the ends of the earth to keep it on the DL. Even if you have to dodge this person for a few days, do it; do whatever you have to NOT to tell them.

This is from Modern Manners Guy.