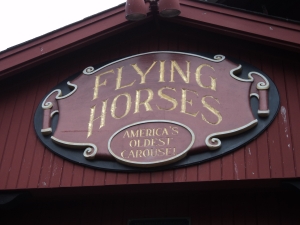 A really fun day trip is to take the Island Queen ferry from Falmouth MA to Martha’s Vineyard-this particular ferry drops you in Oak Bluffs. Here is some history of the town:

Oak Bluffs was first settled by Europeans in 1642 and was part of Edgartown until 1880, when it was officially incorporated as Cottage City. Oak Bluffs was the only one of the six towns on the island to be consciously planned, and the only one developed specifically with tourism in mind.
In 1866 Robert Morris Copeland was hired by a group of New England developers to design a planned residential community in Martha’s Vineyard. The site, a large, rolling, treeless pasture overlooking Vineyard Sound, was adjacent to the immensely popular Methodist camp meeting, Wesleyan Grove, a curving network of narrow streets lined with quaint “Carpenter’s Gothic” cottages, picket fences, and pocket parks. Seeking to take advantage of the camp’s seasonal popularity (and overflowing population), the developers established Oak Bluffs Land and Wharf Company, gaining immediate success: Five hundred lots were sold between 1868 and 1871. Copeland would end up creating three plans for the community to accommodate its constant expansion. Oak Bluffs is the one of the earliest planned residential communities and largely informed later suburban development in the United States.
Some of the earliest visitors to the area that became Cottage City and later Oak Bluffs were Methodists, who gathered in the oak grove each summer for multi-day religious “camp meetings” held under large tents and in the open air. As families returned to the grove year after year, tents pitched on the ground gave way to tents pitched on wooden platforms and eventually to small wooden cottages. Small in scale and closely packed, the cottages grew more elaborate over time. Porches, balconies, elaborate door and window frames became common, as did complex wooden scrollwork affixed to the roof edges as decorative trim. The unique “Carpenter’s Gothic” architectural style of the cottages was often accented by the owner’s use of bright, multi-hue paint schemes, and gave the summer cottages a quaint, almost storybook look. Dubbed “gingerbread cottages,” they became a tourist attraction in their own right in the late nineteenth century. So, too, did the Tabernacle: a circular, open-sided pavilion covered by a metal roof supported by tall wrought iron columns, erected in the late 1880s, which became a venue for services and community events. The campground’s gingerbread cottages are cherished historic landmarks as well as very expensive real estate. Many are still family owned and passed on generation to generation. On April 5, 2005, the grounds and buildings in the Campground were designated a National Historic Landmark by the Secretary of the Interior.
Nineteenth-century tourists, arriving by steamer from the mainland, could also choose from a wide range of secular attractions: shops, restaurants, ice cream parlors, dance halls, band concerts, walks along seaside promenades, or swims in the waters of Nantucket Sound. In 1884, the Flying Horses Carousel was brought to Oak Bluffs from Coney Island and installed a few blocks inland from the ocean, where it remains in operation today. Built in 1876, it is the oldest platform carousel still in operation. Like the grounds and buildings of the Campground (so designated in April 2005), the Flying Horses were designated a National Historic Landmark by the Secretary of the Interior.

2 thoughts on “Oak Bluffs on the Vineyard”