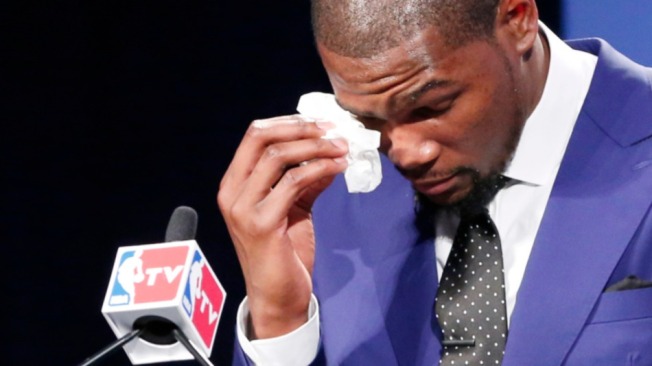 I just loved what Kevin Durant said about his Mom as he won the MVP for the NBA this year:

EDMOND, Okla. — The human habit of being swayed by the moment at hand is as old as the world itself, but it was hard not to leave Kevin Durant’s NBA MVP acceptance speech with the strong belief that there will never be another one like it.

The Chicago Bulls’ Derrick Rose made people reach for the tissues during his 2011 speech, when the point guard told personal stories about his childhood and paid touching homage to his mother as she sat just a few feet away inside the United Center. Others before him have tugged at our heartstrings and comported themselves with aplomb as well.

But by the time the Oklahoma City Thunder star was done with his 25-minute speech, done with the interview session afterward and done with the gala-like event that included hundreds of fans and Oklahoma City’s mayor celebrating inside the team’s old practice facility outside of town, the totality of his genuine performance will be tough to top by any measure. He thanked teammates by name, telling personal tales about each of their relationships and why they mattered to him. He thanked his coaches, talking at length about the close bond he has had with coach Scott Brooks since they came together during the Seattle SuperSonics days in 2007.

He was talking through tears long before he addressed his mother, Wanda Pratt, who raised Kevin and his brother, Tony, in a Washington D.C. suburb of Seat Pleasant, Md., and who was there in a fancy white dress on Tuesday. The video montage of Durant’s charity work and unique personality had been impressive, as was the support he had waiting for him outside where all the music and games and frivolity awaited.

When he finally turned his attention to  the woman who has always been his backbone, everything else seemed to fade away. With the room captivated, the son who is truly one of a kind spoke from the heart.

“Single parent with two boys by the time you were 21 years old,” Durant said, crying. “Everybody told us we weren’t supposed to be here. We moved from apartment to apartment by ourselves. One of the best memories I had was when we moved into our first apartment. No bed, no furniture, and we just all sat in a room and just hugged each other. We thought we’d made it.”

As Rose had reminded us just a few years before, these big boys of the NBA are never too old to thank the women who brought them into the world — even when it’s in front of the world. When Durant nearly quit basketball as a seventh-grader, the gangly kid questioning everything from his own talent to the idea that all of this hard work was even worth it and telling his Godfather, Taras “Stink” Brown, that he was done, Wanda was the one who told him to keep going.

Pratt, who worked as a Postal Service mail handler to make ends meet, had grown up on the same rough streets as her boys. She knew that quitting anything at this crucial stage only led youngsters down a dark path. Then during his freshman season at National Christian Academy in Fort Washington, Md., with Durant frustrated at the lack of attention from AAU coaches and tempted by things that tempt kids at that age, he nearly quit again until guess-who intervened.

“I was going to quit, and be a so-called street guy,” he told me in April 2012. “(Pratt) could see it in my eyes and she pulled me to the side one day, and she slapped it out of me. She talked to me, gave me some good words and kind of revved me up a little bit, so ever since then I’ve been on the same path.”

One thought on “A True Mother’s Day”