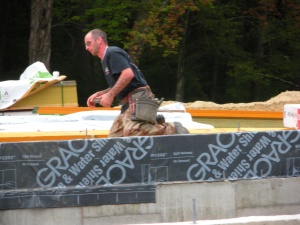 Of course the first thing you want when building a house is a great architecture firm.We were lucky-we already knew Jen Hart of Hart Associates and knew that she really likes what we like:to make a new house look old. Jen’s touches and thoughts will hopefully lead our house to look like it was always there when people drive by- they will think it is a farmhouse  built a century ago. Jen and  her team are also very involved with the barn and reconfiguring that when the frame arrives from Pennsylvania.

The foundation for both house and barn are in-next step is to start the framing for the house. Then it will get very exciting! 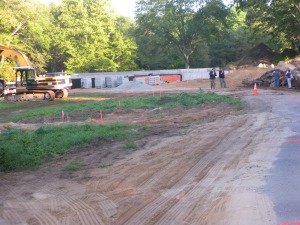 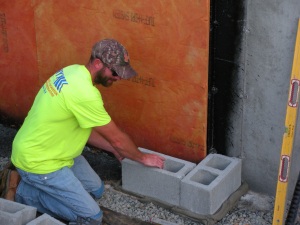 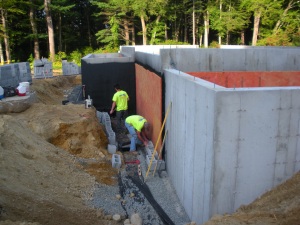 Using a backhoe and a bulldozer, the crew clears the site of rocks, debris and trees for the house and the septic system. The crew levels the site, puts up wooden forms to serve as a template for the foundation, and digs the holes and trenches. Footings (structures where the house interfaces with the earth that supports it) are installed.

After the concrete is cured, the crew applies a waterproofing membrane to the foundation walls; installs drains, sewer and water taps and any plumbing that needs to go into the basement floor; and backfills excavated dirt into the hole around the foundation wall.

This next week will be exciting as the lumber is being delivered and the walls will start going up. The barn foundation is also being poured this week and the old barn form from Pennsylvania will arrive early next week. 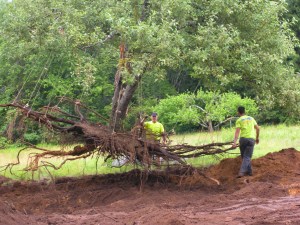 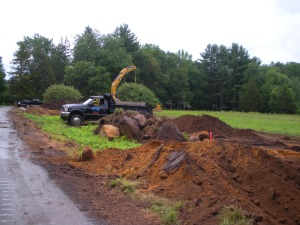 There were 5 apple trees that had been planted about 50 years ago on the property. We had Onyx Construction (who is doing all of the landscape work,stone walls and site work) take a look at the 5 trees and they determined that 3 of them were worth moving-the new driveway is going exactly where the trees had been located.

The days before the move were very interesting-they really spent a long time very carefully digging around the roots,watering and then finally one day they were up in the air flying to their new location. That was in July and they seem to be fine-hopefully they will all make it and be in their new home at least another 50 years. 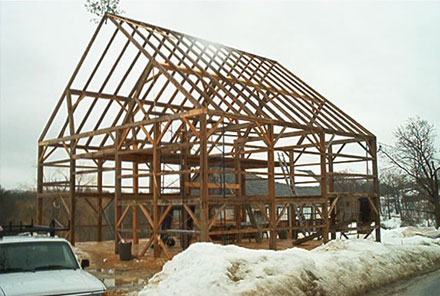 The next piece was figuring out how and where to get an older barn and be able to relocate it to our property. Quite by chance we located a company that does exactly that. Colonial Barn Restoration-check out their website,it is amazing what they can do to a barn!They have located a barn for us from Pennsylvania-3 miles from where my husband grew up,so it is very special.

Here is an excerpt  from their website describing what they do:

As the price of land rises, people in this area subdivide their land into smaller and smaller lots. We have been involved with a number of projects where an antique barn was located on a subdivided lot. The owners wanted to keep the barn with the original house on the property so we moved the barn over on the same property. Since then we have learned the ins and outs of moving buildings and have moved several. Moving buildings in one piece is very economical. The state of Massachusetts even takes down power lines for free to help facilitate the move.Often times our clients want to move a barn frame a long distance or there are too many trees in the way to move it to its new location in one piece. We have lots of experience taking apart and reassembling barns in new locations.When we take a barn completely apart we have a chance to inspect every structural element and make any needed repairs. We can also make slight changes to the frame to satisfy building code restraints or change the layout slightly for modern uses. We have a design and engineering team to help make these changes.We often use reclaimed lumber for repairs so that they are not as apparent. 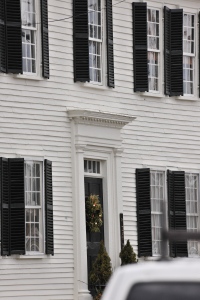 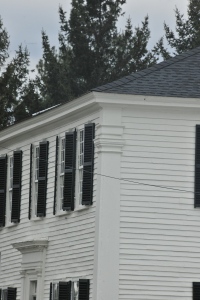 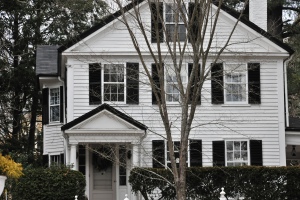 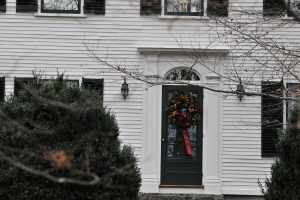 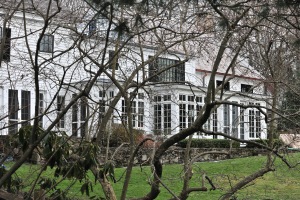 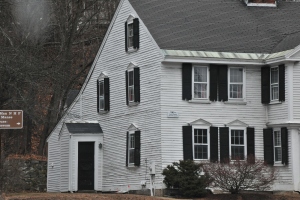 So many decisions when building a house.We met all winter and spring this year with the architects,landscape architect,builder….one thing we were sure of was that we wanted a house that looked like it had always been there. In our case, a federal style farmhouse seemed to be the right thing. One day we drove around Lincoln MA looking at houses and styles off architecture-doorways,windows,moldings,trim work. These are pictures from that excursion. 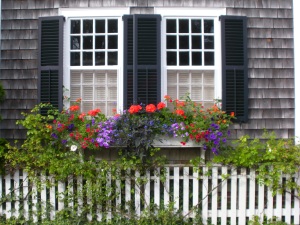 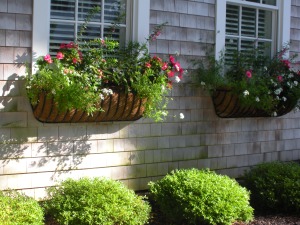 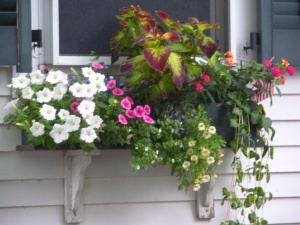 Summer may be over for this year but you can certainly start dreaming about next summer ! Here are some ideas for window boxes that I saw in Edgartown….Happy Labor Day!