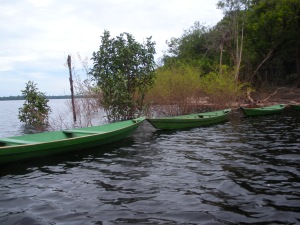 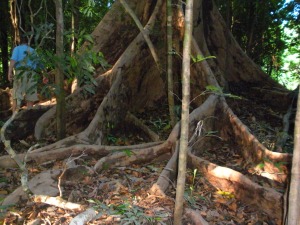 A few weeks ago, we went on a fabulous trip with some friends. We flew into Manaus,Brazil and stayed there one night. The next day we took a private bus to our lodge which was 100 miles northwest of Manaus. We stayed for 4 days  at a wonderful lodge called Anavilhanas Jungle Lodge. We had a tour guide that took us out every day on the Rio Negro which is a tributary of the Amazon. Even that was about 18 miles( where we were) across to the other side with over 400 islands in it!

Here is more information,as we learned it,about the Amazon and Rio Negro:

Rio Negro is the largest left tributary of the Amazon, the largest backwater river in the world, and one of the world’s ten largest rivers in average discharge. It has its sources along the watershed between the Orinoco and the Amazon basins, and also connects with the Orinoco by way of the Casiquiare canal in southern Venezuela. In Colombia, where the Rio Negro’s sources are located, it is called the Guainía River. Its main affluent is the Vaupes , which disputes with the headwaters of the Guaviare branch of the Orinoco, the drainage of the eastern slope of the Andes of Columbia. The Rio Negro flows into the Rio Solimões to form the Amazon River South of Manaus, Brazil.

Rio Negro is navigable for 430 mi from its mouth  in the dry season, but it has many sandbanks and minor difficulties. A small portion of it forms the international boundary between Colombia and Venezuela.

In the wet season, it floods the country far and wide, sometimes to a width of 19 miles, for long distances, and for 40 miles upstream. During this time, from April until October, it is a succession of lagoons, full of long islands and intricate channels. The foothills of the Andes begin just before reaching the Vaupes . At this point, the Negro narrows and is filled with many large rocks over which it violently flows in cataracts, rapids and whirlpools..

While the name Rio Negro means Black River, its waters aren’t exactly black; they are similar in color to strong tea. The dark color comes from humid acid from incomplete breakdown of phenol-containing vegetation from sandy clearings. The river’s name arises from the fact that it looks black from afar.

Much has been written on the productivity of the Rio Negro and other blackwater rivers. The older idea that these are “hunger rivers” is giving way, with new research, to the recognition that the Rio Negro, for example, supports a large fishing industry and has numerous turtle beaches. If the Negro was empty of Indians during the 17th century, introduced exotic diseases and warfare are more likely causes than low river productivity.

About 700 fish species have been documented in the river basin, and it is estimated that the total is 800–900 fish species, including almost 100 endemics and several undescribed species. Among these are many that are important in the aquarium trade, including the cardinal tetra.

2 thoughts on “The Amazon and Rio Negro”