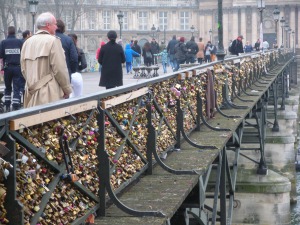 I recently took  a trip to see my daughter who is studying in Paris for the semester. I saw the usual sights-the Louvre,Notre Dame,Champs Elysees,Eiffel Tower but what fascinated me the most(because I hadn’t seen it before) were the “love locks” on a lot of the bridges. Apparently there is some history to it -how it started. A lot of it you can guess, but I still found it interesting-

The history of love padlocks dates back at least 100 years to a melancholic Serbian tale of  World War 1, with an attribution for the bridgeMost Ljubavi (lit. the Bridge of Love) in spa town of  Vrnjacka Banja. A local schoolmistress named Nada, who was from Vrnjačka Banja, fell in love with a Serbian officer named Relja. After they committed to each other Relja went to war in Greece where he fell in love with a local woman from Corfu. As a consequence, Relja and Nada broke off their engagement. Nada never recovered from that devastating blow, and after some time she died due to heartbreak from her unfortunate love. As young women from Vrnjacka Banja wanted to protect their own loves, they started writing down their names, with the names of their loved ones, on padlocks and affixing them to the railings of the bridge where Nada and Relja used to meet.

In the rest of Europe, love padlocks started appearing in the early 2000s. The reasons love padlocks started to appear vary between locations and in many instances are unclear. However, in Rome, the ritual of affixing love padlocks to the bridge Ponte Milvio can be attributed to the 2006 book “I Want You” by Italian author Federico Moccia, who made a film adaptation in 2007.

In May 2010 the city of Paris expressed concern over the growing number of love-locks on the Pont Des Arts,Passerelle, Leopold Seder-Senghor and the Pont de LArcheveche bridges, stating: “they raise problems for the preservation of our architectural heritage”. The lovelocks on the Pont des Arts mysteriously disappeared during the night of 11 May 2010, but the Administration denied responsibility, until it was discovered that they had been removed by a student of the nearby Ecole des Beaux Arts to make a sculpture. Love locks immediately began appearing on the Pont de L’Archeveche and have since spread to at least 11 Seine bridges, the Canal Saint Martin footbridges, and to parks and monuments all over the city. Many tourists mistakenly believe this is a longstanding Parisian tradition, not realizing the practice only migrated into Paris in late 2008 after affecting cities in Italy and Asia.

In January 2014, a campaign and petition, No Love Locks™, was founded by two Americans living in Paris in an effort to save the city’s historic bridges and monuments from the overwhelming number of locks. The international media attention the campaign received has been credited with the actions begun in the summer and fall of 2014, when the city began seeking alternatives to love locks and asking the public to stop placing locks on Parisian bridges and monuments. On 9 June 2014, the weight of the padlocks on the Pont Des Arts bridge were blamed for the collapse of part of the parapet. The city began an experiment in September 2014 on the Pont des Arts, replacing three panels with a special type of glass that would prevent locks from being attached.

2 thoughts on “Love Locks in Paris”