A great thing to do if in Pittsburgh. Operational after the Duck Boat Tours in Boston were so popular,Pittsburgh has had much success with this tour as well. 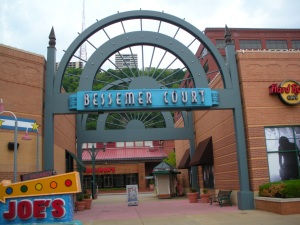 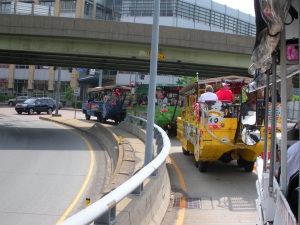 On the tour, they first talk about the skyline of Pittsburgh. It is  the second-largest city in  Pennsylvania, and is home to 135 completed high rises, 29 of which stand at least 300 feet tall. The tallest building in Pittsburgh is the 64 story US Steel Building, which rises 841 feet and was completed in 1970. The second-tallest skyscraper in the city is BNY Mellon Center. 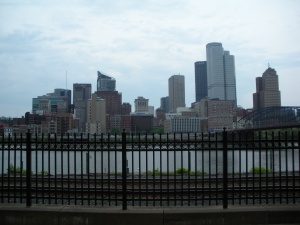 One of the things they also talk about is about the flood of March 17 and 18, 1936. The city witnessed the worst flood in its history when flood levels peaked at 46 feet. This flood became known as the Great St.Patricks Day Flood. 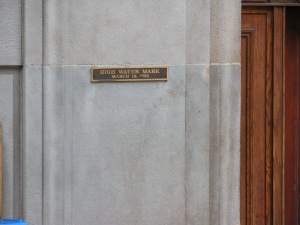 Pittsburgh is also a city of many different styles of architecture. There are many beautiful old churches and office buildings and then many new “shiny” buildings. The cluster known as PPG Place is a complex   consisting of six buildings(and are the shiniest!) within three city blocks and five and a half acres. Named for its anchor tenant, PPG Industries, who initiated the project for its headquarters, the buildings are all of matching glass design consisting of 19,750 pieces of glass. The complex centers on One PPG Place, a 40-story office building. Groundbreaking ceremonies occurred on January 28, 1981. The complex buildings opened between 1983 and 1984. Total cost of construction was $200 million ($488.8 million today). The buildings were sold by The Hillman Company to Highwoods Properties in 2011. 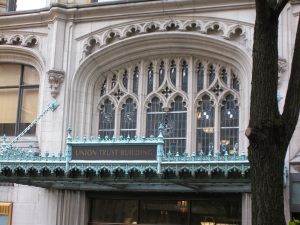 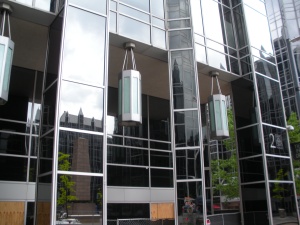 Once you have driven through the city quaking all the way, you dip into the  Monongahela River for a tour from the water. You first see the second of two “inclines”.The Monongahela Incline, built by John Endres in 1870, is located near the Smithfield Street Bridge. It is the oldest continuously operating funicular in the US. It is also one of two surviving inclines from the original 17 passenger-carrying inclines built in Pittsburgh starting in the late 19th century.

Pittsburgh’s expanding industrial base in 1860 created a huge demand for labor, attracting mainly German immigrants to the region. This created a serious housing shortage as industry occupied most of the flat lands adjacent to the river, leaving only the steep, surrounding hillsides of Mt. Washington or “Coal Hill” for housing. However, travel between the “hill” and other areas was hindered by a lack of good roads or public transport.The predominantly German immigrants who settled on Mt. Washington, remembering the cable cars  of their former country, proposed the construction of inclines along the face of Coal Hill. The result was the Monongahela Incline, which opened May 28, 1870.Earlier inclines were used to transport coal in the Pittsburgh area. 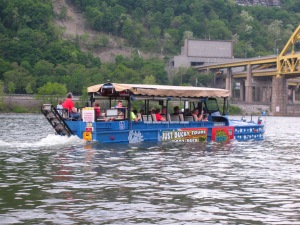 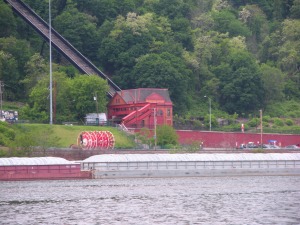 You next paddle by the home of the Pittsburgh Steelers and the University of Pittsburgh Panthers which is called Heinz Field ,and then by the beautiful Point State Park which was filled with strolling couples with small children. 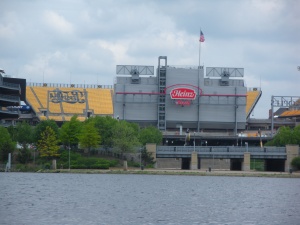 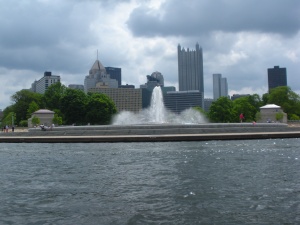 There are also many other ways to see Pittsburgh. Another popular one is to take an evening dinner cruise  on the Gateway River Fleet. 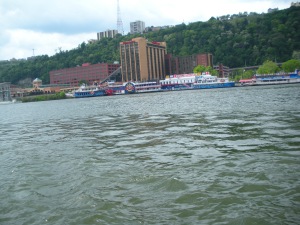 Near the end of the tour the guides play a little game with you. They ask “how many bridges are there in Pitttsburgh?” Of course the answer is one that no one could even imagine….without bridges, the Pittsburgh region would be a series of fragmented valleys, hillsides, river plains, and isolated communities. A 2006 study determined that Pittsburgh has 446 bridges, and with its proximity to three major rivers and countless hills and ravines, Pittsburgh is known as “The City of Bridges”. 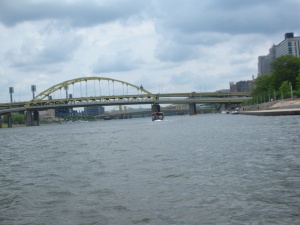 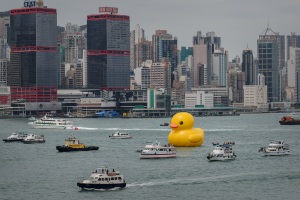 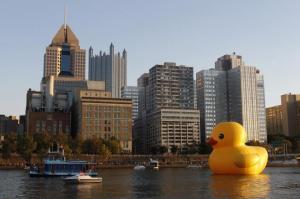 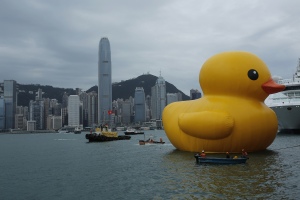 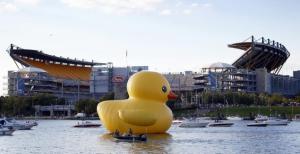 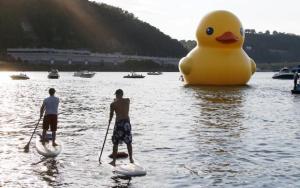 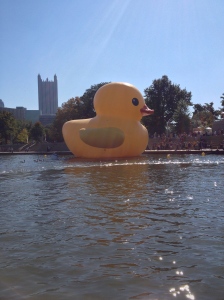 We saw this in Pittsburgh-they had just had the “International Festival of Firsts” to welcome him.   Here is some news about it:

The first U.S. version of the 40-foot-tall rubber duckie that’s made a splash in harbors from Hong Kong to Sao Paulo since 2007 has appeared in Pittsburgh.

Each city builds its own duck from the plans of Dutch artist Florentijn Hofman, and the whole project includes massive pontoons, crews to inflate and deflate the duck, and in this case, alerting organizations such as the Coast Guard and the U.S. Army Corps of Engineers.

Hofman has said the duck has “healing properties” because it knows no frontiers, doesn’t discriminate and doesn’t have a political connotation.

The project began when Paul Organisak of the Pittsburgh Cultural Trust saw pictures of other duck events and sought Hofman’s approval for the first U.S. duckie.

But even after agreement was reached, Organisak was in for some surprises about its creation.

“I just thought you blow up the duck and put it in the water,” he said, but in fact there’s been a secret months-long construction process, including 14,000-pound pontoons.

It’s no secret that the large inflatable bird, an absurd creation, caused a bit of a pop culture frenzy in Hong Kong. “Countless duck-themed products have shown up at shops and restaurants.Teenagers are wearing duck-themed outfits, and tourist kiosks are selling rubber duck postcards,” writes the New York Times’ Joyce Lau. “Its smiling face was even seen at the Cheung Chau bun festival, a 200-year-old tradition on an outlying island.”

When the balloon sculpture was deflated for maintenance earlier this month, the duck’s temporary demise prompted pure panic (particularly on Twitter), with one disappointed bird fan stating to AFP, “The sky looks like it is crying for me-I took time off from work just to see the duck and now it is just a blob”.

Hofman’s beloved masterpiece was eventually revived, and the world hopped on the gigantic waterfowl wagon once again — even going as far as involving the Rubber Duck in a viral campaign to commemorate Tiananmen Square.

“It’s a big yellow rubber duck. You’ve got to have a sense of humor about a thing like this, or you’re missing the point” muses one observer in Pittsburgh. 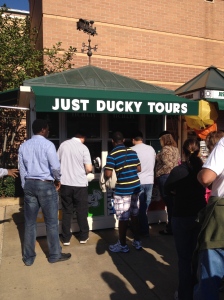 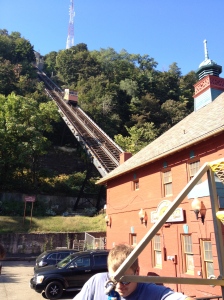 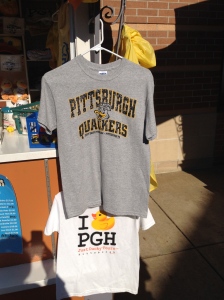 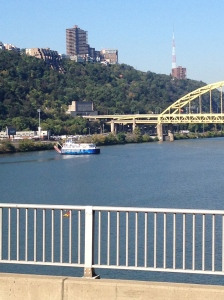 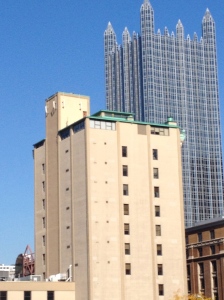 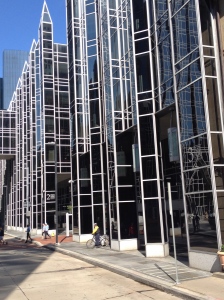 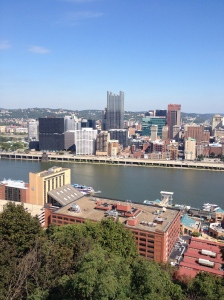 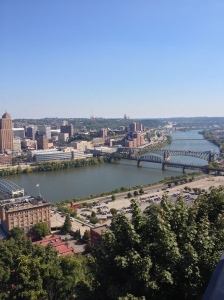 I  was out in Pittsburgh visiting my son and future daughter- in- law in  this past weekend. We took the “Just Ducky Tour” and learned a lot about this great city.

Pittsburgh has 446 bridges, and with its proximity to three major rivers and countless hills and ravines, Pittsburgh is known as “The City of Bridges”. That is 3 more than Venice, Italy! It is also surprisingly hilly-there are two verniculars that you can take up the side of the mountain to get great views. There is PPG Place-called “the crown jewel of the Pittsburgh skyline”. It is a 6 building complex,complete with an outdoor skating rink,adjacent to Market Square.

Rich and productive, Pittsburgh was also the “Smoky City,” with smog sometimes so thick that streetlights burned during the day as well as rivers that resembled open sewers. Civic leaders, notably Mayor David Lawrence elected in 1945, and Richard Mellon, chairman of Mellon Bank, began smoke control and urban revitalization, also known as Urban Renewal projects that transformed the city.

Beginning in the late 1970s and early 1980s, the steel industry in Pittsburgh began to implode along with the deindustrialization of the U.S. Following the 1981–1982 recession, for example, the mills laid off 153,000 workers. The steel mills began to shut down. These closures caused a ripple effect, as railroads, mines, and other factories across the region lost business and closed. The local economy suffered a depression, marked by high unemployment and underemployment, as laid-off workers took lower-paying, non-union jobs. Pittsburgh suffered as elsewhere in the Rust belt with a declining population, and like many other U.S. cities, it also saw flight to the suburbs.

Top corporate headquarters such as  Gulf Oil(1985), Koppers (1987), Westinghouse (1996) and Rockwell International (1989) were bought out by larger firms, with the loss of high paying, white collar headquarters and research personnel (the “brain drain”) as well as massive charitable contributions by the “home based” companies to local cultural and educational institutions. At the time of the Gulf Oil merger in 1985 it was the largest buyout in world history involving the company that was No. 7 on the Fortune 500 just six years earlier. Over 1,000 high paying white collar corporate and PhD research jobs were lost in one day.

Pittsburgh is home to three universities that are included in most under-graduate and graduate school national rankings, The University of Pittsburgh, Carnegie Mellon University and Duquesne University.Carnegie Mellon and the University of Pittsburgh had evolved in the mid-20th century along lines that followed the needs of the heavy industries that financed and directed their development. The collapse of steel put pressure on those two universities to reinvent themselves as research centers in science and technology which acted to pull the regional economy toward high-technology fields.

Present-day Pittsburgh, with a diversified economy, a low cost of living, and a rich infrastructure for education and culture, has been ranked as one of the World’s most livable cities. The Pittsburgh diaspora that left the area during the Steel Crisis and comprise Steeler Nation, supporters of the Pittsburgh Steeler football team, celebrate an industrial city and ethnic culture that no longer exists; according to one scholar, “The blue-collar Pittsburgh that you see flashed on the screen during games exists only in Steeler bars and in the visitors’ parking lot during tailgate parties!”