This statue is causing quite a stir at Wellesley College!

The statue is part of a Wellesley art gallery show by the sculptor Tony Matelli and was placed on campus by the college’s Davis Museum staff. “We placed the Sleepwalker on the roadside just beyond the Davis [museum] to connect the exhibition — within the museum — to the campus world beyond,” Davis Museum director Lisa Fischman wrote in an open letter.

Students say that “Sleepwalker” is inappropriate for an all-women’s campus, and may inadvertently trigger fears of sexual assault. More than 250 people have signed a petition to remove the statue, which reads:

The statue of the nearly naked man on the Wellesley College campus is an entirely inappropriate and potentially harmful addition to our community that we, as members of the student body, would like removed immediately … this highly lifelike sculpture has, within just a few hours of its outdoor installation, become a source of apprehension, fear, and triggering thoughts regarding sexual assault for many members of our campus community. While it may appear humorous, or thought-provoking to some, it has already become a source of undue stress for many Wellesley College students, the majority of whom live, study, and work in this space.

According to the Globe, “Many students were seen making a casual beeline for the new addition on campus — some smiled and laughed as they got closer; others frowned and seemed apprehensive.” Additionally, the Globe reports, “many drivers could be seen slamming on their brakes as they approached or passed the statue, craning their necks for a second look.” 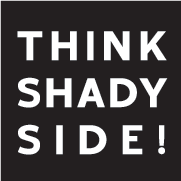 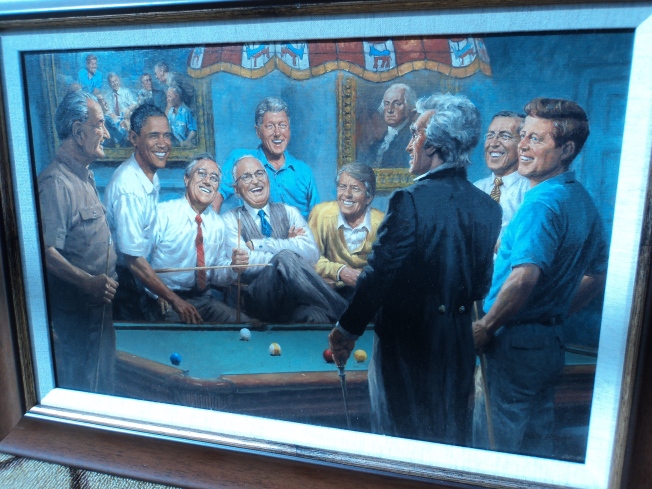 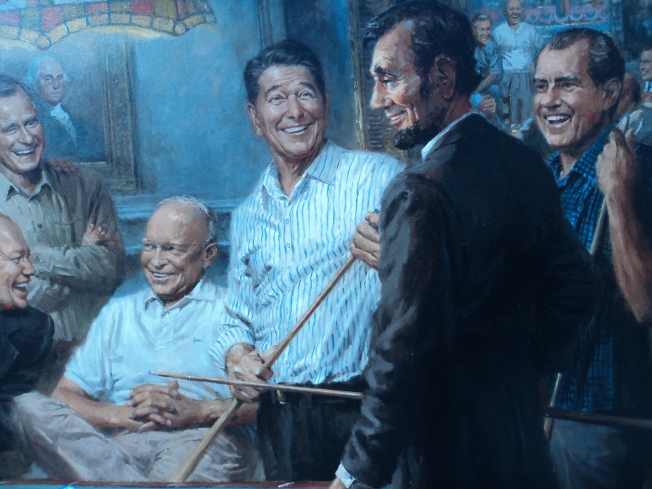 In view of what is going on in Washington right now, you have to find some humor in the situation somehow. I thought these paintings were a riot-the artist mixed the generations of US Presidents and put them all in scenes where they are playing pool! They are at Maser Galleries in Shadyside (on Walnut Street),a cute little town very near  Pittsburgh.

The artist is Andy Thomas.  He has a range of topics that he paints- historical, western, political and everyday charm.