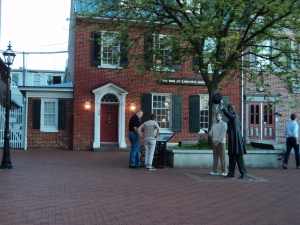 This year makes a special occasion for Gettysburg College, the town and the nation. They are in the midst of the Sesquicentennial Commemoration of the American Civil War(2011-2015) and 2013 marks the 150th anniversaries of the Battle of Gettysburg and President Abraham Lincoln’s Gettysburg Address.Gettysburg College has a rich history that started almost three decades before our nation’s greatest conflict.

Gettysburg College was founded on April 7,1832 by theologian Samuel Simon Schmucker. When the battle of Gettysburg began,the College stood in it’s midst. Elements of the two great armies swept through campus on July 1,1863,the first day of the decisive battle of Gettysburg. Pennsylvania Hall(pictured) became a hospital for hundreds of soldiers from both North and South.

On November 19,1863 townspeople,students, and faculty marched to hear President Lincoln hallow the National Cemetery with his Gettysburg Address.David Wills,an 1851 graduate,invited Lincoln to deliver “a few appropriate remarks”.You can visit the Wills house and view the bed that Lincoln spent the night in on that historic visit.

Last November,2012 Steven Spielberg who directed the movie “Lincoln” and Doris Kearns Goodwin who wrote the book “Team of Rivals” were in Gettysburg together and spoke to a crowd of over 9,000 people. 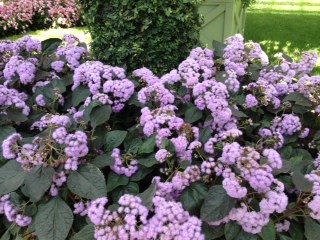 A friend just went to Longwood Gardens in Kennett Square, PA (1/2 hour away from Philadelphia) and sent me these pictures. I have been there as well years ago and the gardens are incredible. Here is some history:

Exquisite flowers, majestic trees, dazzling fountains, extravagant conservatory, starlit theatre, thunderous organ—all describe the magic of Longwood Gardens, a horticultural showstopper where the gardening arts are encased in classic forms and enhanced by modern technology. Many generations helped create Longwood Gardens, but one individual—Pierre S. du Pont (1870-1954), industrialist, conservationist, farmer, designer, impresario, and philanthropist—made the most enduring contribution.
Pierre du Pont was the great-grandson of Eleuthère Irénée du Pont (1771-1834), who arrived from France in 1800 and founded the E. I. du Pont de Nemours and Company gunpowder works. Pierre turned the family business into a corporate empire in the early 20th century and used his resulting fortune to develop the Longwood property.
More than 200 years earlier, the land had been inhabited by the native Lenni Lenape tribe who hunted, fished, and farmed the productive wilderness. In 1700, a Quaker family named Peirce purchased the property from William Penn and soon established a working farm. Joshua and Samuel Peirce began planting an arboretum on the farm in 1798. The farm was purchased in 1906 by Pierre du Pont so he could preserve the trees, and from 1907 until the 1930s Mr. du Pont created most of what is enjoyed today. In 1946, the Gardens were turned over to a foundation set up by Mr. du Pont. After his death in 1954 Longwood’s first director was hired. Since that time Longwood Gardens has matured into a magnificent horticultural showplace filled with countless opportunities for enjoyment and learning.
Longwood owes its present-day success to the Peirces, who actively pursued a Quaker interest in natural history. By 1850, the site was known as one of the finest collections of trees in the nation, and one of the first public parks, and its aesthetic qualities were as important as its botanical significance.